Westfield takes steps to make sure every child is ready to learn and enjoy life.

As it was half term this week, Miss Johnson and Mr Bowden checked on the bees.

In the white hive, they couldn’t find the new queen at all. There was capped brood but no eggs, larvae or grubs. The bees were polishing up the cells in the frames to make them ready for the new queen however, so she might still be in the hive but isn’t quite ready to lay eggs yet. Sometimes it can take a little while!

There was one queen cell in the white hive which was capped; Miss Johnson decided to leave it on in case the new queen hadn’t mated properly (or had been eaten by a bird on her mating flight). The cell was in the middle of the frame, so we don’t think it is a swarm cell.

The pink hive has finally started to produce honey!

The bees were really calm and didn’t mind being inspected at all. Miss Johnson and Mr Bowden didn’t see the queen in that hive either, but she’s definitely in there as there were eggs, larvae, grubs and capped brood in the frames. These bees like to build brace comb (extra wax comb between the frames and the box) so some of that was taken off. Miss Johnson thinks it might be because this was once a feral colony which swarmed from a hive right up in a tree last year. Who knows?!

Today we saw honey that could be harvested and able to eat. In the super, which is the first layer of frames where the honey is made, the honey was capped and that makes it look like white. First the bees have to go to flowers to collect nectar which is then mixed with the bee saliva called enzyme and as this is passed between the bees it gets more and more mixed with the enzyme. It is then put into the comb giving it its name honeycomb. When we want to harvest this honey the bees must be brushed off the frame and then the honey gets spun in a honey spinner which separates the wax from the honey. It is then ready to eat 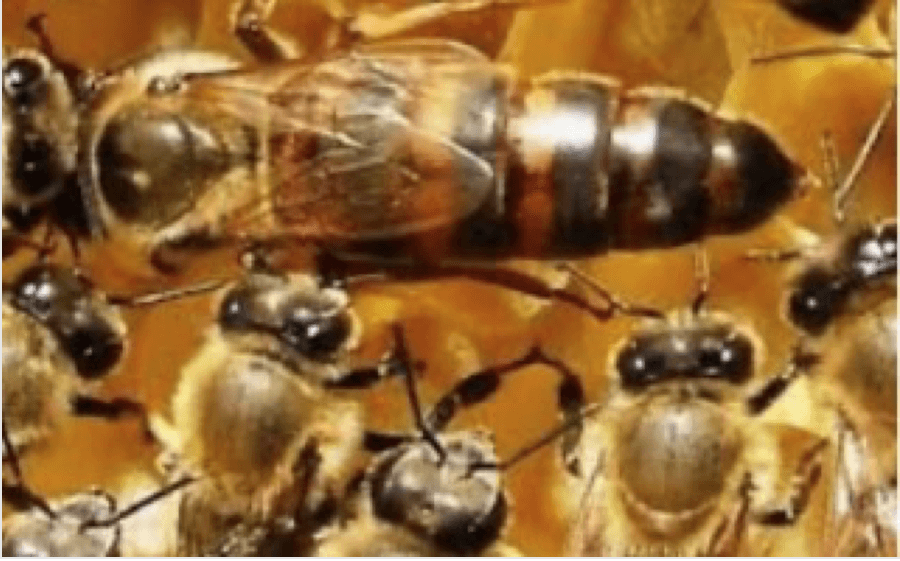 This week, there were three queen cells but only in the white hive. Miss Johnson scraped two off because they might swarm (and that is not good) but she left one on because it looked good and strong. This was called a supersedure cell.
The bad thing about lots of queen cells is that it means the bees are thinking about swarming and that would mean losing half your hive (and half your honey!) because some of them might leave. When they decide to make a new queen (superseding),
it means the old one is running out of eggs so they make a new one to replace her. This picture is what our queen cell looks like: 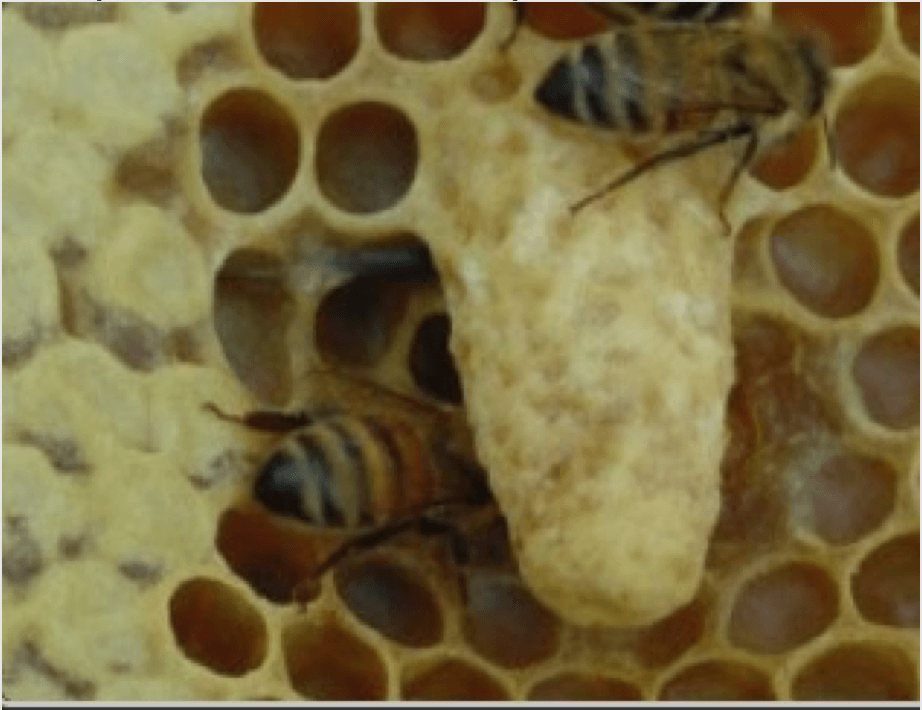 Bees communicate using the waggle dance (they waggle their body) and Abi saw a bee doing it on my arm while I (Maeve)
was lifting out a frame. It’s like us talking to one another but instead of talking, they dance. 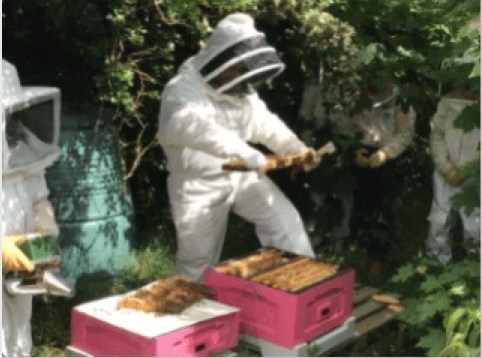 This was probably our most confident visit to the bees yet. All of us (Maeve, Abi, Jacob, and I -Katie-) lifted out a frame from both
the super and the brood box. In the picture above, Miss Johnson is lifting out the frames and checking for any queen or queen
cells which we did not see this time in the pink hive but we saw the queen and queen cells in the white hive.

Swarmed and went every were. Lucky I (Jacob) was there with the smoker and puffed it,
so they all went down into the brood box and calmed themselves.

Swarmed and went every were. Lucky I (Jacob) was there with the smoker and puffed it, so they all
went down into the brood box and calmed themselves. 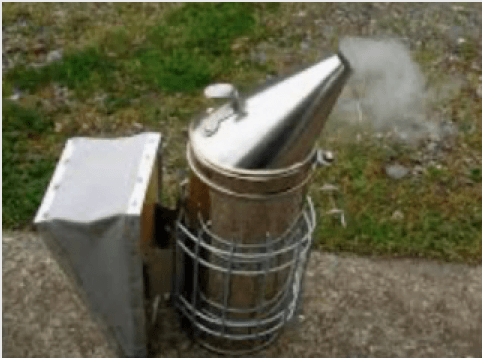 Larvae are basically baby bees (but not quite). We saw also saw some eggs in the comb and they look a bit like grains of rice. These are good to see because it means that they will grow into bees and increase the amount that will live there. Here is what they look like: 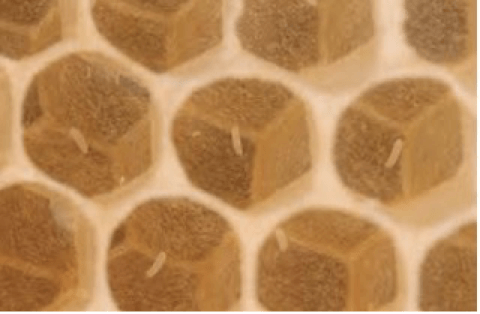 The honey in the white hive is almost ready to harvest but you cannot take all of the honey the bees make, as that is their food. You get the honey out by brushing the bees away from where the honey is and then you scrape it off. Once it is out, you spin it to separate the honey from the wax. Miss Johnson has said that when there is enough capped honey, we can use a honey extractor to harvest it.

Next week, there might be a new queen bee. If so, in a couple of weeks we are going to have to catch her and put a dot on her so that in the future we can easily identify her. We can’t do this until she has been on her mating flight. None of us apart from Miss Johnson have ever done this before and we are all very excited about it. I can’t wait to see how it is done.

That is all for this week!

When we first arrived, the bees were flying around and busy collecting nectar and pollen to take back to the hive to make honey. We manged to find the queen bee and some honey in the white hive. We also saw eggs, grubs, larvae and caped brood. Two weeks ago, we put a ‘super’ on top of the brood nest to give the queen more space to lay eggs, but she isn’t using it yet.

In this photo you can see the queen bee

(it is the one that has a red dot on top) 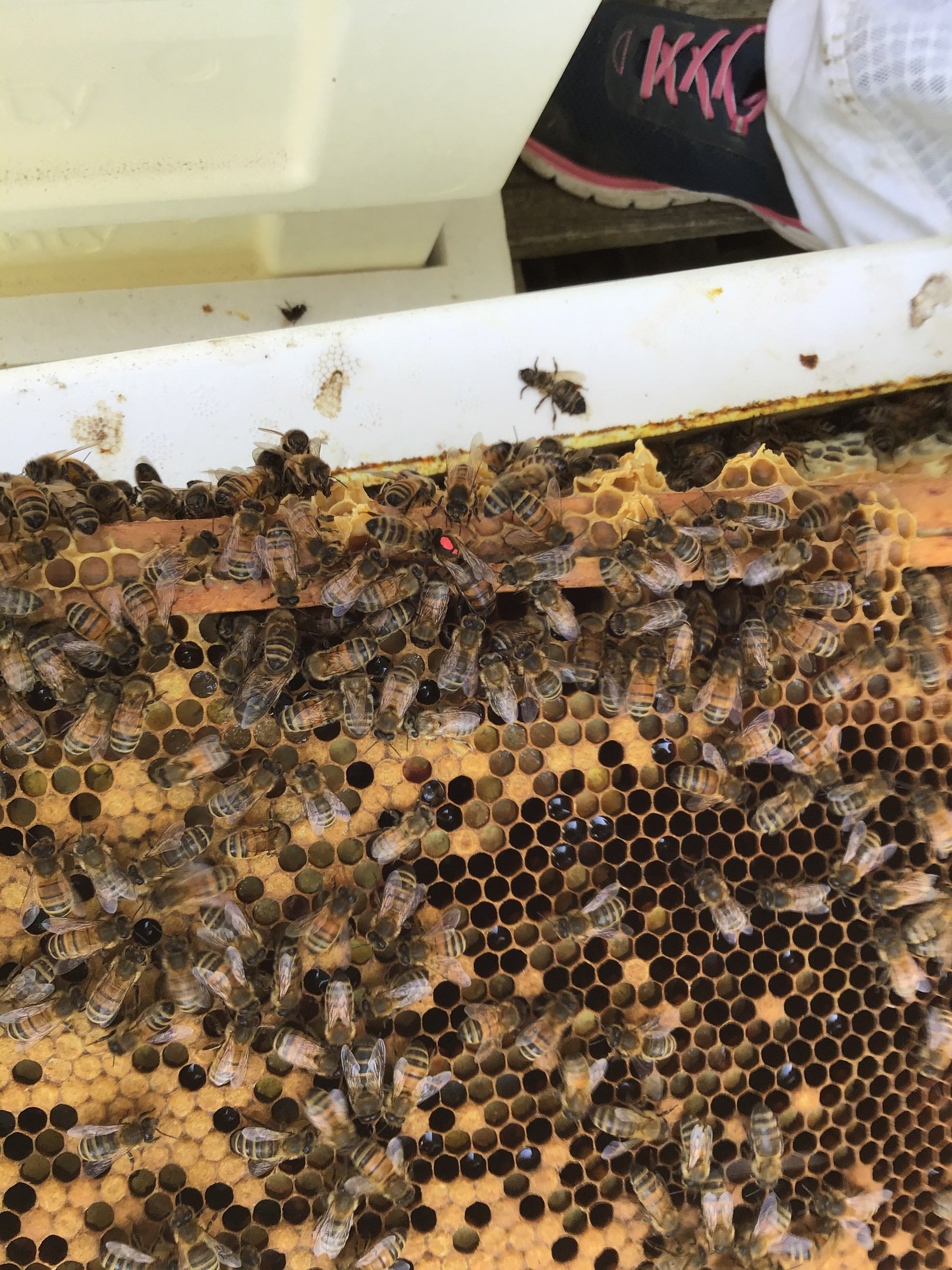 In the pink hive there was a smaller colony and their frames were really good but there is no honey in their ‘super’ yet. Their brood pattern was very good and like the white hive, we saw the queen bee with her big red dot on her back. Surprisingly, she was on the last frame and that was a big shock because the queens normally live in the middle frames. The other thing that was surprising was that both of the hives were really calm this week but they were had been quite defensive a couple of weeks ago.

Mr Bowden had a go at doing the frames and lifting them up and inspecting them. He did really well as it was his first time in the apiary. This week we were only meant to be looking for queen cells (as weather wasn’t too good and it had been raining all week), so we only had a short time to check the bees in case they were thinking about swarming. However, it turned out to be a bit more than that!

Katie and I (Abi) saw the queen bee but Maeve was behind the fence so we called her over. It was an amazing thing to see because it was a long and wide bee, it had a big red spot on its back and it had a clipped wing so it didn’t swarm.

The colony’s comb was covered in lots of things. There was the wax that the bees had pulled out to make room for other things. In some of the comb there were grubs (baby bees) being fed by the worker bees. Also inside were drones ( boy bees ) they were like knobbly bits of comb sticking up. We did see honey but it was for them to eat so we did not take any. As well as honey we saw nectar and pollen. The bees in the pink hive were much
calmer than last week. 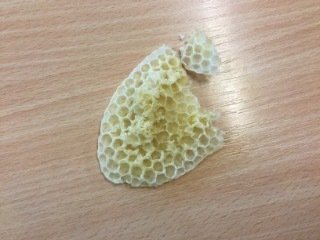 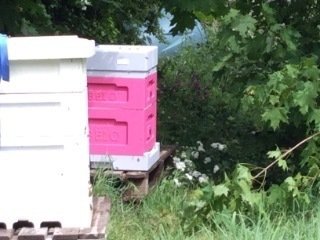 The outfits we had to wear were white protective suits with mesh around the head so the bees didn’t sting you. Some were half suits and some were whole. Jacob and I (Maeve) wore the half suits. 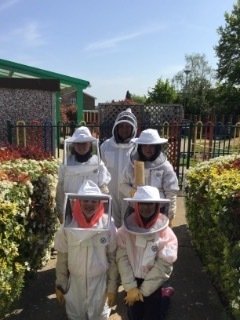 We also had to wear lots of protective clothing underneath them like jogging bottoms, leggings or as many things as we could fit on, so that hopefully, we wouldn’t get stung!

There were many tools to use including a bee brush to brush off
the bees, the hive tool to take out the frames so that we could
check if they were going to swarm and finally, there was
the smoker that was used to calm the bees down and make them easier to handle.
I (Abi) was the person who got to do that. 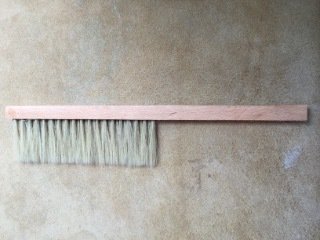 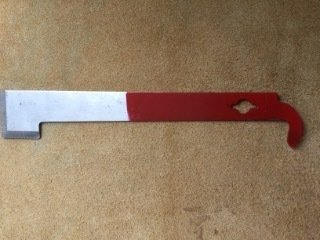 That is all for this week.

We use necessary cookies to make our site work. We'd also like to set optional analytics cookies to help us improve it. We won't set optional cookies unless you enable them. Using this tool will set a cookie on your device to remember your preferences.

Necessary cookies enable core functionality such as security, network management, and accessibility. You may disable these by changing your browser settings, but this may affect how the website functions.